Approximately 211 million gallons of water goes unaccounted for every year in Lincolnton, North Carolina – which results in tremendous lost annual revenue for this fast-growing city northwest of Charlotte.

“Seven to 10 percent of our customers have a leak in their house and don’t know it because the older meter simply isn’t catching it,” City of Lincolnton, North Carolina, Water Services Director Robert Pearson said.

For any community, these statistics are cringe-worthy. For the City of Lincolnton, they’ve become downright unacceptable. And certainly Lincolnton isn’t alone in this dilemma. According to the American Water Works Association (AWWA), an 2013 assessment of validated water audit data from 246 water utilities  (a small portion of more than 50,000 water utilities in the United States) incurred 130.1 billion gallons of water lost due to system leakage - meaning water losses across all water utilities in the United States is a staggering level. Lincolnton’s long-term goal is to bring its unaccounted-for water from the current 20 percent loss closer to a goal of 3 percent.

After learning about Kamstrup smart metering solutions, a pilot program was put in place in late 2018 to replace 109 of the city’s approximately 6,000 water connections with the Kamstrup AMI solution. The ROI that Lincolnton immediately saw toppled fears of risk and change, pleased employees and customers, and convinced decision-makers to unanimously approve moving forward with city-wide implementation.

“We were skeptical at first because the meter product and overall solution were both new and very different – and, frankly, sounded too good to be true. But the most dangerous reason to stick with the status quo is because ‘we’ve always done it that way.” Pearson said.

“Our challenges aren’t just about water loss and revenue loss. We also need a system that can help us better serve our current and future customers”

Technology for a growing city

It’s easy to see why Lincolnton, a former mill town with a population today of 11,000, has become one of the fastest-growing “micro” communities in North Carolina. The city’s slogan – Near the City. Near the Mountains. Near Perfect. – says it all.

Demand for water has risen as the population has increased, and a drought only a couple of years ago makes future-proofing the utility a priority. But the old metering system – fraught with inaccurate data – had made it a challenge for the city to properly plan and budget for the future. Meanwhile, more and more customers – especially younger generations – expect instant data and transparency. “Our challenges aren’t just about water loss and revenue loss,” said David Ramsey, Lincolnton Utility Customer Service Supervisor. “We also need a system that can help us better serve our current and future customers.” With Kamstrup, they found a complete – and completely different – solution.

The recently implemented Kamstrup technology allows for the pinpoint measurement that Lincolnton seeks – accurate to an industry-leading 0.015 gallons per minute (GPM) compared to around 0.05 GPM for other conventional meters. And, with no moving parts, this level of accuracy does not decrease at any point in the meter’s 20-year lifecycle.

Accurate to an industry-leading 0.015 gallons per minute (GPM) compared to around 0.05 GPM for other conventional meters.

Each data collection unit picks up signals from the meters then transferred to the utility every three hours, or eight times a day.

A system that collects an array of data and has multiple alarm capabilities to help with near- and long-term planning.

Robust solution for the long-term

Because of its ultrasonic technology, the meter is solid state with no moving parts and is not susceptible to static noise or magnetic fields. A composite polymer body makes the meter contamination- and condensation-resistant, watertight and eco-friendly.

Each data collection unit picks up signals from the meters and the hourly data is then transferred to the water utility every three hours, or eight times a day. In other words, Lincolnton is saying goodbye to “meterbox blindness” – old meters that only collect one data point per month and maybe have basic situational awareness alarms – and welcoming a system that collects an array of data and has multiple alarm capabilities to help with near- and long-term planning. “It’s all about business intelligence. In addition to ensuring fair and accurate billing for our customers, we’ll be able to optimize operations through near real-time analysis of water loss and pressure throughout the distribution system. We’ll be able to plan and make informed decisions about customer service, budgeting and even scheduling water-main and pipe repair in order to prevent catastrophic incidents,” Ramsey said.

Based on the results of the pilot project, Lincolnton approved in June 2019 the move to citywide implementation, with a goal of completion by December 2019. “From our perspective, we can’t get the meters in the ground fast enough,” Pearson said.

The city is seeing both hard and soft cost savings. ROI is occurring in months rather than years. Benefits are realized in the form of reduced operations and management expenses and improved operational efficiency, enhanced revenue found by measuring more water, and the vast amount of data and business intelligence now at employees’ fingertips. 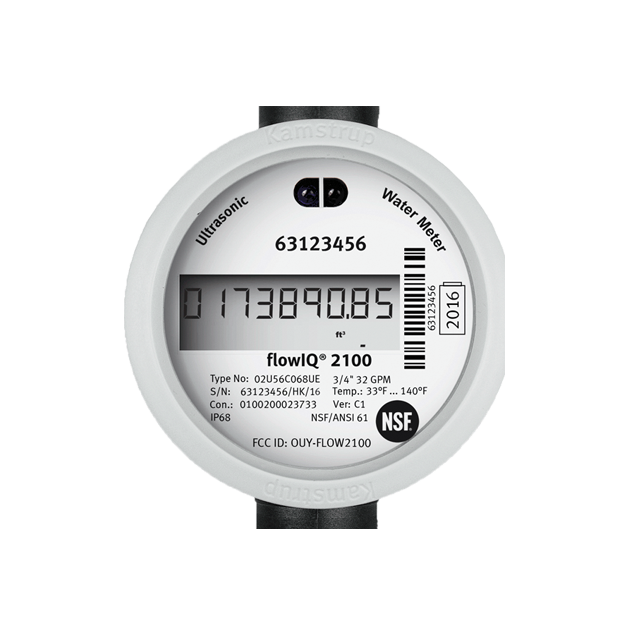 flowIQ® 2100 is an ultrasonic smart water meter suited for residential use. With pinpoint accuracy, up to 16 years lifetime and integrated communication.

READy is an effective and high-performing system for remote reading. A READy system can be adjusted to meet your needs and be expanded as they change.

By installing fixed data collection units in your supply area, you can read the consumption data and info codes from meters and sensors automatically.