This article was first published by FORESIGHT Climate & Energy.

It features in this blog as part of a partnership between Kamstrup and FORESIGHT to promote independent journalism focusing on and bring valuable insights on issues that are important in the global energy transition.

Policies to roll out proven technologies at scale are essential if clean energy sources are to replace fossil fuels in heating and cooling systems. 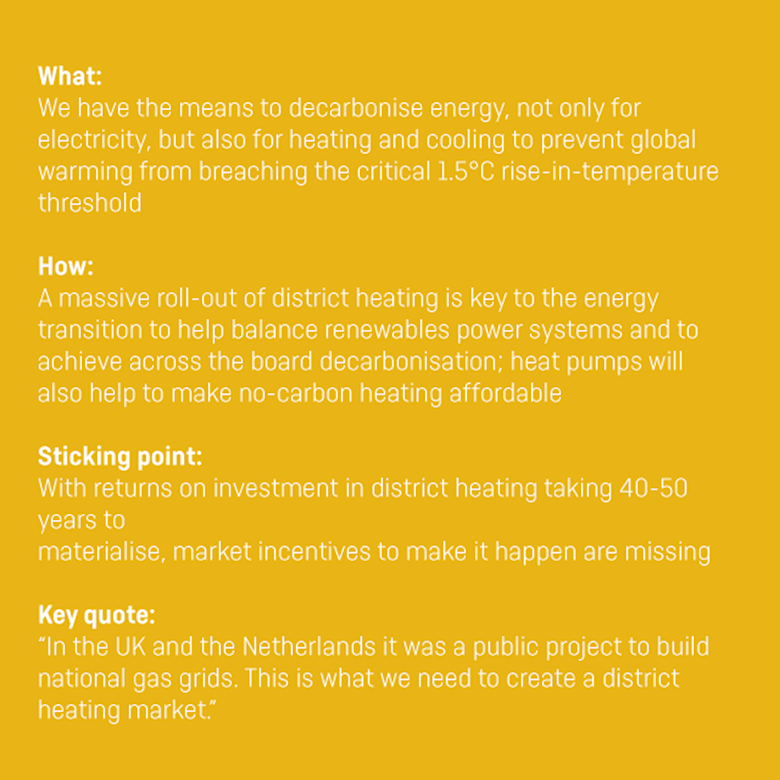 In the traditional children’s story, Goldilocks tests the bowls of porridge belonging to the three bears to see which is the best to eat. One is too hot, another too cold. But the third is just right, the perfect temperature to be gobbled up. For life to exist, the temperature of our planet needs to pass the Goldilocks test — not too hot or too cold. We want our homes and offices also to be just right. Creating the perfect indoor temperature is, however, often at the expense of the planet’s equilibrium since most heating and cooling systems are powered by greenhouse gas producing fossil fuels. Getting the decarbonisation of these systems onto the political agenda has been slow going. But heat pumps and district heating are increasingly on policy makers’ lips as they realise the importance of cleaner heating and cooling processes to meet international climate targets. 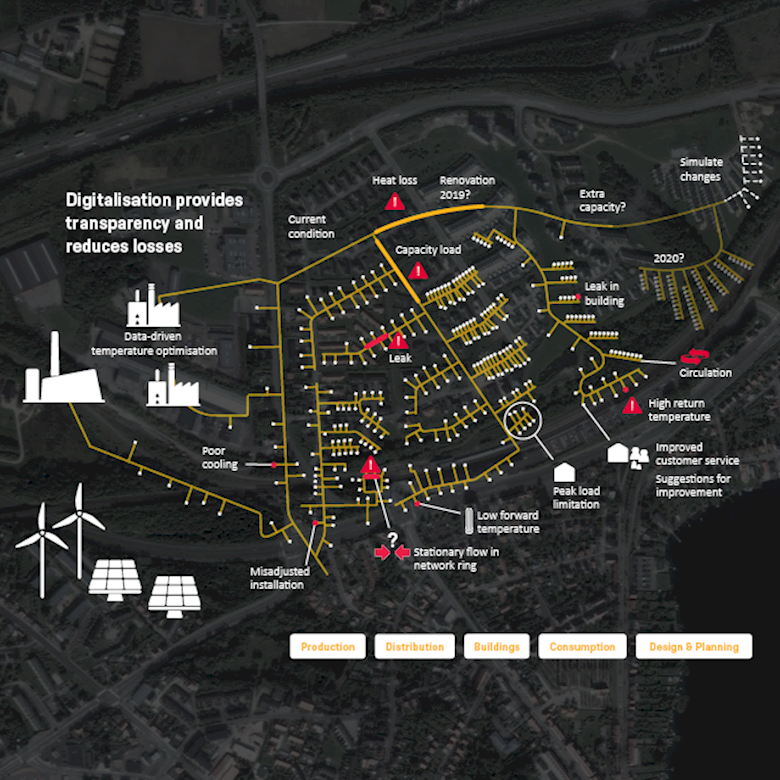 Solutions exist, yet systematic action and dedicated financing remain patchy. In Europe, 84% of heating and cooling is still generated from fossil fuels with only 16% from renewable energy. The Heat Roadmap Europe (HRE) strategy was aimed at turning this situation around and showing a clear path ahead. Over a three-year period to February 2019, the EU-funded initiative mapped and modelled the energy systems of the 14 European countries that use the most heat. This covered 85-90% of all heating and cooling demand in Europe. In its final report, HRE concludes that: “Using only proven and market available technologies, it is possible to combine end-use savings with heat pumps and district heating and cooling using excess heat, efficiency and renewable sources to stay within the 1.5-2°C global temperature change threshold.”

China and Chile are now carrying out their own mapping exercises.

The solution to decarbonising the world’s heating and cooling systems lies in changing attitudes as much as changing technologies. Mention district heating to people over the age of 50 and many will reply with a dismissive “Soviet era stuff”. Many countries where district heating has remained commonplace are indeed former, or current, Communist states. Globally, new district heating connections have grown by around 3.5% a year since 2010, driven in particular by China’s extensive network, says the International Energy Agency (IEA).

But district heating may be about to get trendy everywhere. 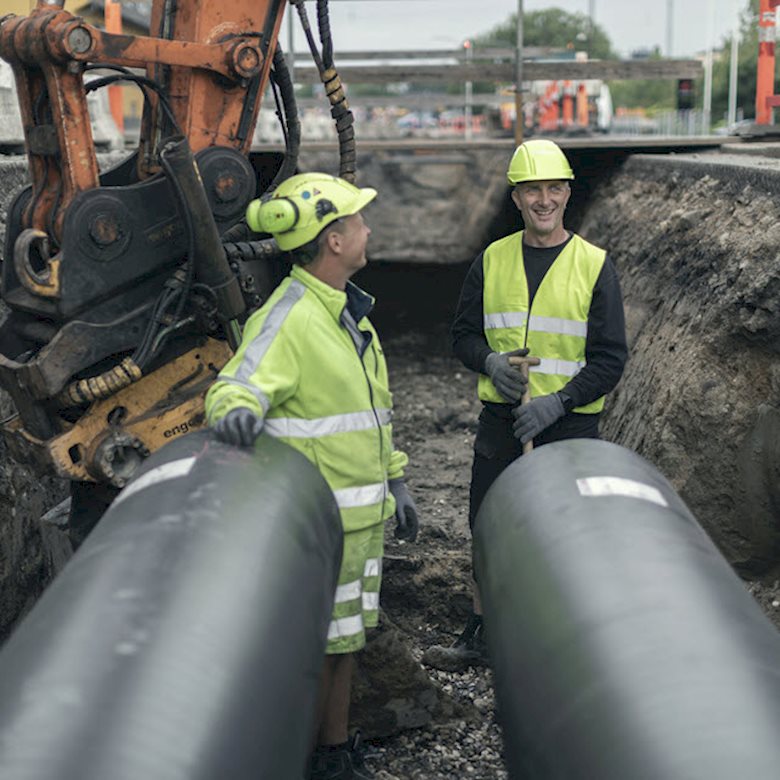 “The expansion of thermal grids is crucial to redesign the energy system and enable better integration of renewable energy and excess heat sources,” says HRE. District heating can cost-effectively provide at least half of the heating demand by 2050 in the 14 HRE countries, expanded from about 12% today.

But the district heating systems of the future will need to be fuelled differently than those in action today. Coal and natural gas will need to be replaced with low-carbon sources. Biomass boilers, renewables, excess heat, and the use of combined heat and power and large-scale heat pumps, are all possibilities, concludes HRE.

The beauty of district heating, compared to other solutions, is that it is a known quantity. “Given the high stakes at play and the urgency of the climate situation, we need more and faster progress on the ground starting immediately,” says Paul Voss, managing director of Euroheat & Power, a lobby organisation based in Brussels, Belgium. “This means relying on proven technologies that are already available and establishing a legal framework that supports their development.”

This is what the UN, with various partners, including Danish engineering company Danfoss, is pursuing with its District Heating Initiative. Starting with China, India, Serbia and Chile in 2014, it works with cities and countries around the world to decarbonise their heating and cooling systems through thermal networks. Much of its work is awareness raising and best practice sharing, explains programme manager Lily Riahi. “In India, we spent two years raising awareness,” she says. “We now see a groundswell of support for district networks and they are in the country’s draft national cooling action plan.”

Back in Europe, the Netherlands and France are leading the charge. After the Dutch government announced plans to switch off gas, Delft decided a “collective heating network is the best alternative for high-rise buildings”, most likely fuelled by geothermal and residual heat from the Port of Rotterdam, says Stephan Brandligt, the city’s deputy mayor. France already has around 500 district heating networks providing 6% of its heat demand. Natural gas is the main fuel, but its 2015 energy transition law calls for the share of renewable energy and recovery to increase in district heating from 24.6 terawatt hours (TWh) in 2016 to 39.5 TWh in 2030.

Brian Vad Mathiesen, professor in energy planning at Denmark’s University of Aalborg and part of the HRE project, would like to see other countries being similarly ambitious. “In the UK and the Netherlands it was a public project to build national gas grids. This is what we need to create a district heating market,” he says, underlining the difficulties of getting private companies to invest with a return only 40 to 50 years later.

While district heating may be the urban solution, “individual heat pumps will be key to enabling resource efficiency and electrification” in more rural areas, says HRE. “Since the investment required to unlock their potential is high and often borne by building owners, focus should be on policies and implementation strategies that encourage switching from individual boilers and inefficient electric heating.”

Outside of Sweden, where around 40% of single-family households have one, heat pumps are a relatively rare phenomenon in the EU because an immature market means prices are high. But elsewhere in the world they are a more widespread. “Air source heat pumps are a common technology used in every part of the US,” says the Regulatory Assistance Programme (RAP) in a report published in November 2018. It cites research by the Rocky Mountain Institute showing that, in certain places, heat pumps are already more cost-effective than other heat sources in new buildings over a 15-year period. The US National Renewable Energy Laboratory projects they will be cost-competitive with gas furnaces everywhere in the country by 2050 at the latest. 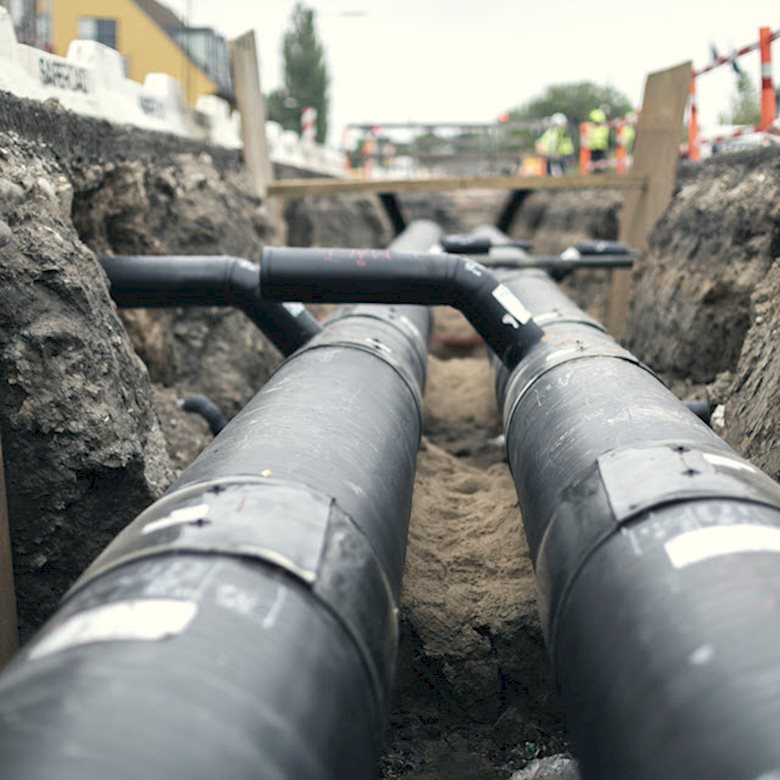 For RAP, changing the way we heat and cool our homes is not only advantageous for the climate, but reduces household bills and enables better grid management. “Electrification of space heating can represent opportunities for all consumers to save money on their total energy bills,” says RAP. “Due to their efficiency, heat pumps can provide equivalent space conditioning for as little as one-quarter the cost of operating conventional heating or cooling appliances.” 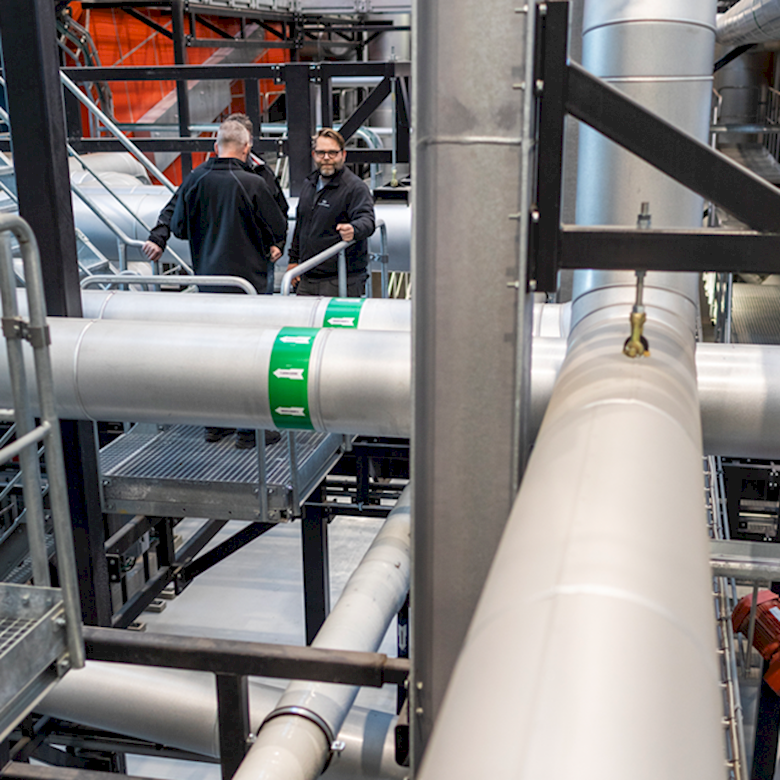 Important as the fuel source and technology are, there is a general consensus that buildings must be properly insulated to ensure peak efficiency. “Heat and building envelopes are the real elephants in the room and countries need to do more to tackle this,” says John Dulac from the IEA. “France and Germany are doing a good job in terms of new buildings, but new constructions are only a small part of the market. Existing buildings are a challenge and there are few incentives for consumers to go above and beyond changing their windows and putting in basic insulation.” This is especially problematic for low income householders, says Dulac. He also points out the lack of energy performance standards for existing buildings and the fact those that exist are “often not verified”.


Dulac insists: “This needs to change,” citing the UK’s introduction of minimum energy efficiency levels for properties for rent or for sale, as a step in the right direction.

Change requires “market mechanisms” that address who pays and who finances what, says Dulac. He highlights the Netherlands’ Energiesprong initiative as a good model. It uses prefabricated insulation and renewables solutions rolled out at scale to refit existing housing and massively reduce emissions at relatively low-cost. “We need to send the signal to market that technology at scale is essential for building renovations,” says Dulac.“Deep retrofits are cost prohibitive, not over the life of a product, but they demand a big upfront capital investment.”

Indeed, heating and cooling are long-term businesses. Vad Mathiesen advocates selling the last gas boiler in the EU by 2030. RAP’s David Farnsworth agrees a similar debate should be had in the US. “We have to keep in mind that a heating system lasts for at least ten to 15 years,” he states. “Natural gas is more economical than heat pumps in most situations in the US, but this will not always be the case as carbon policies make it potentially less attractive. It is for policymakers to decide how to transition away from gas.”

Not everybody agrees that decarbonising heating and cooling systems will mean the end of gas. Jeremy Harrison from Delta Energy & Environment, a consultancy, says the UK has seen a resurgence of interest in gas, in the form of hydrogen, for heating. “Network operators are working together to decarbonise the gas network,” he says. “It is not about a managed phase out, but about a permanent role for gas. Hydrogen can be a key enabler to the transition.” The UK Parliament’s Committee on Climate Change expects that by 2050, hydrogen could provide 25% percent of heat for buildings in the UK. Aberdeen, the country’s oil capital, is studying whether it can deliver up to 100% hydrogen through its gas system to heat homes.

Vad Mathiesen calls on policy makers to take the challenge of decarbonising heating and cooling seriously and “look at the real options and the real economic benefits for cities and citizens”. Dulac concurs. “This is not a pick and choose issue,” he says. “We have to look at the figures and see if there are naturally evident options.”

And get top insights and the latest blog posts delivered to you twice a week on your LinkedIn.

Click here or search for "Kamstrup Heat" on LinkedIn.

Smart metering is a key lever to support the expected growth of the Dutch district heating market. It can provide the data-based insight to ensure district heating remains both competitive and attractive to end users.

Opportunities for data-based optimisation are present throughout a utility’s entire value chain from production to end-user services.

Read More
How Eliminating Unnecessary Bypasses Can Reduce the Return Temperature by 1.5°C

Optimising and reducing return temperatures is possible by analysing the data that smart meters collect about your distribution network.

Read More
We use cookies both to ensure our website works properly and to collect statistics about users in order for us to improve the website. You accept the use of cookies by continuing to browse the site or by closing this banner. Read more.